Ozzie - The Not So Great Cardinal

As baseball fans when you hear the name Ozzie and St. Louis Cardinals you most likely think of the great shortstop Ozzie Smith.  Then when you hear the name Canseco you think of the "not" so great Jose Canseco.  Now lets combine the two names and you get the ever terrible Ozzie Canseco.  In 1991 there were several rookies getting into the league, from some of the greats like Chipper Jones, Jim Thome, Jeff Bagwell to busts like Kevin Maas, Brian Taylor, and Ozzie Canseco.

Looking at Ozzie you wouldn't think he was drafted as a pitcher.  The New York Yankees drafted him in the 2nd round of the 1983 draft.  Around the time Jose entered in the Major Leagues he went from pitcher to the outfield.  Ozzie never really got the bat going in either the majors or minor leagues.  Ozzie hit home runs, but not close to the pace as his brother did as a member of the Oakland A's.  Ozzie's largest minor league home run total was 22 in 1992 as a member of the Louisville Cardinals (AAA).  He spent three years in the majors (1991, 92, 93), playing on the A's and Cardinals.  Here is his Major League stats:

Ozzie continued to play baseball off and on till 2011, but he never had much success in any one year.  Just like Jose, Ozzie is also linked to steroid usage.  Above are five reminders of junk wax cards from a steroid era player.  In one of my 1991 baseball card price guides have his 1991 Topps card listed at $1.50.  By 1992, his card was worth a whopping 5 cents!  Ozzie has been known to impersonate Jose at card shows, on television shows, and reportedly even sleeping with Jose's wife.   I love baseball cards, I love the stories of players, though these cards may only be worth less than a nickle, these stories are comically priceless! 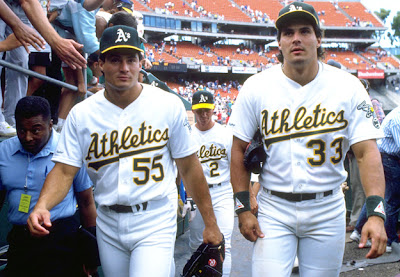 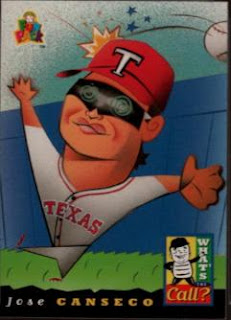 I wonder if Ozzie ever played in a game as Jose?  Maybe it was actually Ozzie who let the ball hit his head that became a home run.
Posted by Unknown at 8:17 PM