This is the first pick for the WTF?  Each week I will go through my collection (I will only feature cards on my blog that I personally own) picking out one card that I will post so we can all make fun of, and we can ask ourselves why at any point did the card company think this card was a great idea.

The 1980-1990s were famous for players cards that always seemed to make me scratch my head.  Here is 1993 Stadium Club #501 Randy Johnson.  Johnson was the majors top fireball-er in the late 80s and all of the 90s.  So why not set up a pose at a studio with a broken bat and a ball.  I am not a big fan of staged baseball cards (with the exception of the comical 1960s poses) and this reminds me of something I would have done for my senior picture as a joke. 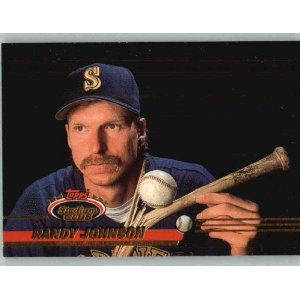 Here is my beef with this picture, how many times a game does someone break their bat at the handle?  I've seen Jamie Moyer break someones bat on a 74 MPH curve ball.  So a bat split at the handle is not rare.  Next issue with this picture is the ball, it is only there for the uneducated collector who didn't know that he throws pitches 100 MPH.  Lastly, he's not even looking at the camera.  Come on Randy, not even a smile?  Good thing we didn't see a card in around 2005 of him holding a baseball and a bird symbolizing exploding a bird.  Imagine nowadays pulling a card like this below. 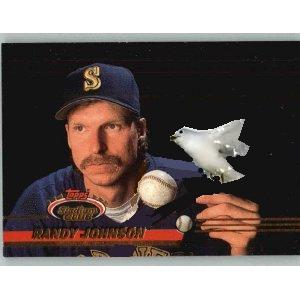 Okay, now you have an image of what the 1993 Topps company would have done if the bird exploding would have happened in 1992.  Now lets take it one more card further... 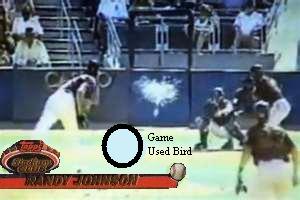 How about a card that has pieces of the bird that Randy Johnson hit?  As a collector, would you think this would be happy with a pull like this?  Would you pay $100 on ebay for this card?  In today's age of game used shoe laces, bases, pants, why not have a bird, or jock straps also featured as game used.  (Just kidding about the jock straps!)

Tune in next week for another WTF Card!