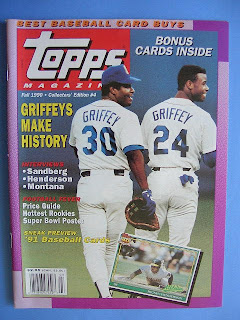 If you collected cards in the early 90s you know this magazine.  I today still have all 16 Topps Magazine issues I got from my local supermarket in St. Louis.  Topps magazine was something different than Beckett.  The issues had lots of different card and player content, had full color pages, baseball cards, and foldout posters.  Most of all the issues came with 4 card inserts that could be cut or ripped out, and it usually had photo card checklist posters.

Here is one of the great articles in each magazine, this one is about vintage Topps Oddball sets.  Topps Magazine was a great and still is a great resource for Topps history. 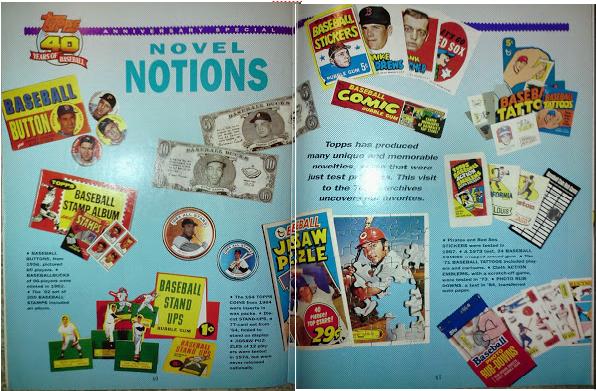 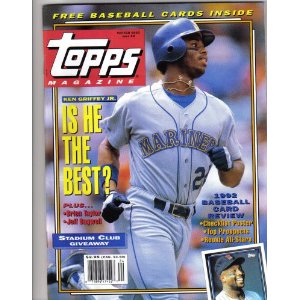 Each issue had a wide variety of hobby talk.  One item I loved looking at each issue was the Hot and Cold (Sizzlers & Fizzlers) lists.  It amazes me that half of the people on the hot list end up not panning out in the majors or have just an average career.  In addition there were times when the posters inside the magazine were that good, it caused me to get another copy!  Topps magazine had what Beckett didn't have, a full color magazine.  Topps looking back seemed to be the innovator on baseball card magazines, but it run was cut short in 1993 due to the sudden surge on Sports Card Magazines such as Tuff Stuff, Baseball/Sport Card Digest, and of course Beckett.  Below are some of random card fronts and backs of the many issues: 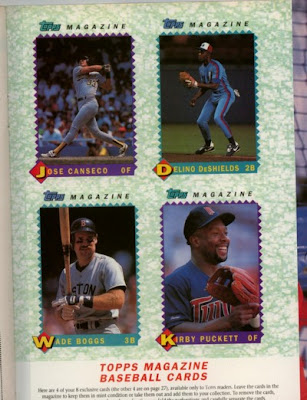 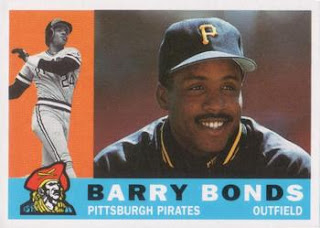 There was another flaw that happened to many baseball card magazines that offered special inserted cards, there were the store card pullers.  I have read that Topps Magazine suffered this as collectors started collecting these cards main stream.  Years later down the road, Tuff Stuff had similar issues with card theft.  Tuff Stuff even went as far as sealing their magazine but still many of them were left open on store shelves.  As main stream collecting went from print to the digital age we have seen the card magazine boom go bust leaving us with nothing but reminders of the past.
If you are the type of collector who loves nostalgia, you can find many of the issues on ebay for $5-10 per issue, but more if the cards are still intact.  Since I bought usually two issues, one I pulled out the posters or cut photos, and one I kept intact (minus the cards).  Today I proudly display my Topps Magazine collection, one of the only things I proudly display from the overproduction era.