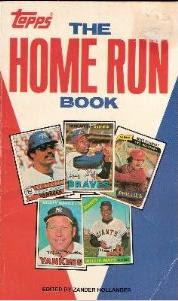 Before there was Jose Canseco, Mark McGwire, and Barry Bonds, there were players like Hank Aaron, Johnny Bench, and Yogi Berra.  In 1981 Topps created a pretty neat book simply called "The Home Run Book".  Today if this book was created many of these past great ball players would be overshadowed by the "Juice" ball era players.

This book is nothing super special, but is a good sized 96-pages, full of information, and dozens of black and white photos.  I found this book at an old book store many years ago for a quarter, without even opening the book I knew it was a must have for me.  The big appeal, it was made by Topps and the cover had some great photos of baseball cards.

Inside the very last page of the book is a short description of Sadaharu Oh who hit 868 home runs while playing in Japan.  Interesting notes about Oh, he also holds a tie with several others with the most home runs in a season at 55.  Oh managed several different teams in Japan in the 1990s and until retiring in 2008.  Oh reportedly would tell his pitchers to intentionally walk American batters who were nearing breaking his single season record.  Two times Oh's teams would be playing a player who held a tie at 55 home runs, in 1998 Karl Rhodes, and in 2001 Alex Cabrera.  (1)

This book not only has information on players, but it has sections such as season records, home run first timers, sizing up home run hitter, and even information looking into Babe Ruth's called shot.  Let us not forget the chapter about if anyone will ever break Roger Maris' single season home run record of 61.  I just read this book again last night and fell back in love with players that I have forgotten about from Hack Wilson to Boog Powell.

If you are a card collector that also doubles as collecting baseball books, this is a must have.  Today you can find this online at Amazon for $4 with shipping, or better yet, maybe you can pick it up like I did for a quarter at an old book store!  I hope you find one of these books for your collection too!
Posted by Unknown at 8:05 PM