Every few weeks I like cracking open some of my old Beckett's or collector magazines and make fun of how silly us collectors used to look. The 90s for collecting both is viewed as an innovative age but also where many collectors got disconnected from the hobby.  It was the 90s when people stopped collecting for the love of the sport, but started collecting to make money or as an investment.  Once collectors realized a few years later that just because Beckett said a card was worth $1,000 that nobody was paying even a quarter of that.  I have nearly every Beckett in the 90s and every year each product was topping the charts in the hundreds to even thousands.  Then some years later, that thousand dollar set is only worth one hundred.  So where is the investment there?  In the 1990s people would only want to sell their cards for what the book value was.  You had kids saying, Beckett says it is worth $100, I want $100!  We today are a different collector, we understand that NOBODY usually pays anymore what Beckett states.  Beckett is merely a guide, but if you are a true collector, you know without opening up a Beckett what things cost.  Below is the mindset of collectors in the 1990s.  This is a young kid who is only thinking of value and how much he can get for a card.  I was brainwashed by Beckett in the 1990s to think the same way as the kid below.

The kid above looks like he is maybe ten years old.  You pick up a few items that tells you how he collects:


Almost every Beckett in 90s has some kid talking about the prices or baseball cards like they are as good as money.  We now know that isn't the case.  A baseball card is not like an ounce of gold.  Gold has an actual rate per ounce.  Beckett tries to price cards like gold, but we all know we are not going to pay $8 on a common minor league autograph or a no name relic.  Here is the price of 1993 Finest as it looked in that vary 1998 verses the 2012 Beckett prices. 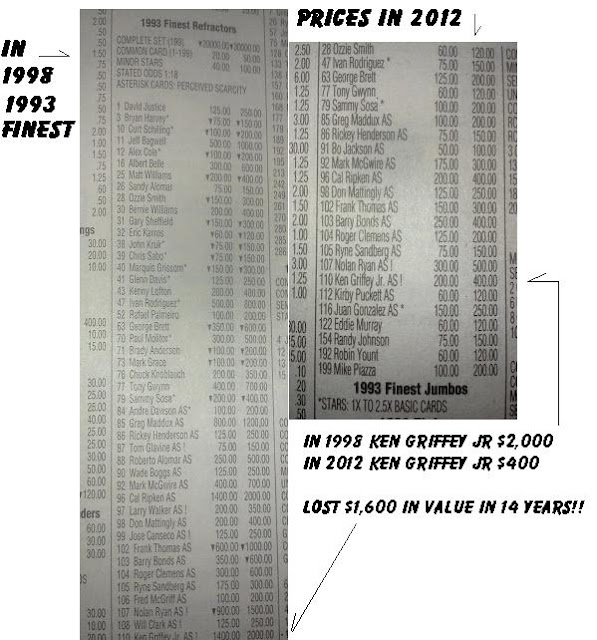 Card shops boomed in the 1990s on the hopes that people would come in and pay book prices for cards, and that kids would come in and rip pack after pack hoping to get one of those $1,000 cards.  After awhile those kids realized that the values were going down, card shops started losing collectors because pack prices were going up but card prices were going down.  Then Ebay started and people could bid on what they wanted to pay for cards instead of going into a card shop and paying full book price.  Again this is more proof that whatever Beckett prints as a price of a card doesn't matter one bit.

Here is around what you would expect to pay today for that Griffey card, and if you were the sucker that spent $2,000 or more ten years ago, I'm sorry.  I love the card, but I don't know if I $548 love it.