The Year of Harper...Finally Over!

I don't want to take anything away from Bryce Harper, it isn't his fault that he is on every single box and pack Topps has produced the past two years.  I do have problems that Harper is getting more news about winning Rookie of the Year than Mike Trout, who had an Albert Pujols type rookie season.  Of course Topps the past two years has done all they can on making as many Harper cards to entice us collectors to buy more of their products.  I'm sure if Topps could they would make rookie cards of Harper for the next five years.  Do I think that Harper is going to be the next Babe Ruth?  No I don't, but I think he'll have a good career.  I didn't agree that he should have made the All Star team, and I didn't think he was the tops for Rookie of the Year.  Of course I don't have a vote, so I have zero say.  Here is how Harper compared to all other NL Rookies.

In addition, overall he was 38th in the NL in hitting and 78th in the majors in average.  I didn't compare him to Miley, pitcher to the D-Backs which placed 2nd in voting.

You have a good mixture above of rookies, Bryce Harper, Jordan Pacheco, Willian Rosario, Norichika Aoki, and Yonder Alonso.  Out of all those players, only one made the playoffs and that was Harper with Washington.  Looking at this as a collector, most Harper autographs out there are running $200 or more.  The other rookies you can pick them up autographs for about $8 each.  I understand that Harper started playing as a teenager, but he is not the only one to have done that.  I did not get to see him play daily but I did watch about two Nationals games a week, and still don't get the hype.  I am going to go on record to say that I expect he will be a .290/25/90 type of hitter.  That is a solid stat line.  The hype that the media and card world gives Harper you would assume he would hit .350/50/125.  I'm glad that the year of Harper is coming to a close!  Years down the road if someone asks me about 2012, I would tell them, "that is a clown question bro!" 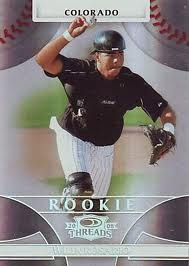 My pick for Rookie of the Year was Wilin Rosario of the Colorado Rockies, and I'll tell you why.  First of all Rosario came into the year as a back-up for the starter Ramon Hernandez.  After Hernandez got hurt in late spring, Rosario began to play everyday.  Rosario had a tough task to catch pitchers who were not ready for the big leagues who came straight from Double-A due to extensive pitching injuries.  Rosario also broke the Colorado Rockies single season rookie home run record with 28.  His stat line was .270 (same as Harper), he had 71 runs batted in (12 more than Harper), 28 home runs (6 more than Harper), all having 137 less at bats as Harper.  If Rosario would have had 137 more at bats we could be looking at Rosario having 35 home runs, and over 100 runs batted in.  One great thing the Colorado Rockies have is Pacheco also a catcher and can back up Rosario if he needs a break behind the plate.  I expect many more big years from Rosario in the coming years!