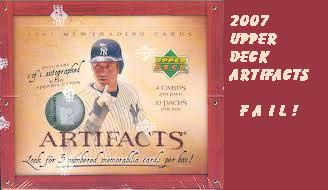 Upper Deck had some of the best looking relic and autograph cards, but was guilty of set over kill.  This isn't a secret, most blogs have already covered this in some form over the past.  The biggest difference between Upper Deck and Topps I find is the quality of the base card selections.  Upper Deck did at times put together some good large sets like 40-Man and Victory, but they got caught doing something different.  They started making 100 card sets with only a select few players, or they made 300 card sets in which 200 cards were tough to obtain SP or autograph cards.  The reason I write about this now is today I found one of those hobby boxes in which I am talking about today, 2007 Upper Deck Artifacts.  I was at a Wal-Mart and I struggled with the prospects of two blaster boxes (maybe getting one hit) or getting this box that has 3 hits for the same price, hoping for someone good.  Below is the base card, try not to throw up in your mouth. 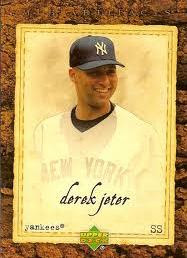 I can't tell if it is supposed to look like an old card or something new and innovative.  First lets look at the definition of the word Artifact to see if this set justifies the name.

When I think of "artifact" and the use in cards, I think of things that are old, gems, jewels, gold, and silver.  I don't classify ultra shinny ugly face shots of players a work of historical interest or art.  Not only are there only 100 cards, minus Tulowitzki the rookie selection is less than be desired.  Like every Upper Deck product with a tiny base set there is promise of hits, which is the only thing that makes these cards desirable. This box was guaranteed at least three numbered hits, and here is what I got.


I do like the fact I got 4 different hits from 4 different hit subsets.  My first hit was a great one, a Chipper Jones relic, and we all already know about his hall of fame career.  Next hit is an autograph of Scott Baker.  Baker isn't a widely known name in baseball, but has a record of 63-48 and a respectable 4.15 ERA.  Last year he was injured and baseball-reference.com states he is a free agent.  Joe Nathan has averaged 37 saves over the past 8 years and has been an All Star.  Final pull was Jhonny Peralta, he is a career .264 and is a one time all-star.

All in all, I enjoyed the break, minus the base cards!
Posted by Unknown at 10:37 PM