I know many of you collectors have at least once tried a group break.  If you haven't it usually works like this: A person/blog/site/card shop will have a box/boxes/or packs of cards to break.  All teams are up for buying.  Normally the teams are tiered, for example the Yankees you will pay more than a team like the D-Backs.  The past ten years we have seen a huge boom of historical and hall of fame players coming back into our sets, inserts, and hits.  So if you pick a team that has been around for 100 years, you not only get base cards of current players, but you have a huge chance of getting many former players on base cards, inserts, and hits.  Someone like me who collects a newer expansion team like the Rockies, we tend to only get the current players base, inserts, and low hits.  Our hits are usually only going to be current autos or relics.  Where as someone with the team like the Red Sox has the chances of getting current autos or relics, plus a chance of autos or relics of players like Fisk, Rice, Williams, Yaz, and so on.  Just look at the back of a Topps pack and look at the former players and their copyrights: Lou Gerig (Yankees), Babe Ruth (Yankees), Mickey Mantle (Yankees), Jackie Robinson (Dodgers), Sandy Koufax (Dodgers) are just a few I've seen in the current years. 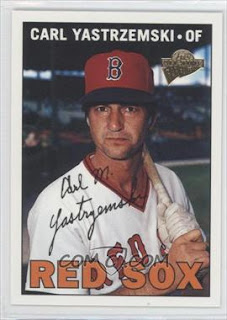 At least many of the group breaks use a tier system, but I've seen one or two around not use one.  Which means all teams pay the same amount.  I just need to tell myself before each group break I do with my team the Rockies, my best hit will be maybe an $8 Dexter Fowler Relic while others may get classic greats like Steve Carlton, Bob Gibson, Dave Winfield, Sandy Koufax autographs...etc.  I can't complain because a team like the Rockies will only pay a fraction of someone who pays for teams like the Cardinals or Yankees so they have more to lose but much more to gain on the flip side.  I am currently in a break right now, not doing too good (looks like I will only get base cards), many of the boxes being broke don't even have Rockies base cards in them.  I am doing another one next year with 2013 Topps Series 1 Case, which should be a much better Rockies product.

One lesson I learned is, I need to check the product checklist to make sure first they have Rockies in the product(s), and if they only have Rockies base and no hits, is it really worth paying for a group break?  Plus boxes or breaks that have boxes with the words vintage or fan favorites...it's going to have a lot of former players, and historically Colorado doesn't do well on those products yet.  It is just growing pains being a newbie in the land of group breaks, but I'll be a usual player for my team the Rockies  if the price is right and the product is good!

Before I go, don't get me wrong, I'm not complaining, I just had too high expectations for what I was going to maybe have a chance to get.  Plus, why is there no love for many of the Rockies greats of the 1990s in the hits world?  Why not have appearances every now and then in some retro/vintage/fan favorites of Eric Young Sr., Gallaraga, Vinny Castilia, Larry Walker, Ellis Burks, Dante Buchiete (currently Larry Walker still gets inserts, but no relics/autos that I've seen)?  Don't forget that the greats featured in fan favorites/retro sets like Howard Johnson and Dale Murphy played for the Rockies, but you will never see them in a Rockies relic/auto.  Thanks for reading, and hope to see you around the break blocks!
Posted by Unknown at 12:38 AM