Collectors and baseball fans out there, lets be real for a second...when the Marlins threw out hundreds of millions of dollars to Jose Reyes, Mark Buehle, Heath Bell, Ozzie Guillen, merged them with already big contracts of Hanley Ramirez and Josh Johnson, we all knew the Marlins were trying to buy a Championship for the opening of Marlins Park.  Once the team went bust in mid summer, the owner couldn't wait to unload his players.  Even though the new name, Miami Marlins, they have new colors, we once again see their true name and colors, they are still the teal Florida Marlins.  The one true star player left on the Marlins, Giancarlo Stanton said on Twitter, "Alright, I'm pissed off!!! Plan & Simple" 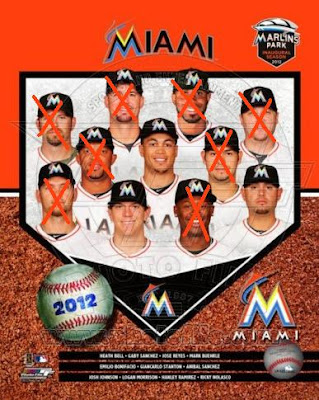 As a fan it disappoints me that the Marlins franchise has two World Championships because I feel they harm the game of baseball.  Every ten years the Marlins spend tons of money for one year to attempt to win a Championship then the owner gets the glory of winning a championship and dumps the players around the league.  The power in baseball has shifted from southern tip of America to north of the boarder.  As the Red Sox restock, the Yankees get even older, we could see a great NL East battle between Baltimore, Tampa, and the Blue Jays.  I would expect this trade makes Toronto one of the favorites to win the AL East, and maybe even the World Series.

I was really hoping that the Marlins moving into Miami and a new stadium would usher a new excitement into the team and the league, but between the trades during the year and today it would be hard to be a die hard Marlins fan.  This type of atmosphere the owner has with if he wins or loses he trades the whole team is the reason why so many in Southern Florida don't get excited year after year about Marlins baseball.

RIP 2012 Miami Marlins, you never had a chance to show your true potential!
Posted by Unknown at 8:46 PM