Proof of Too Many Morons In This Country!

Sorry everyone, I know this is a baseball card blog, but this is sort of about baseball.

As you may have noticed it is election day, so if you are still an undecided voter with maybe less than an hour left to vote, don't worry friends, Yahoo News has you covered!  Are you a Derek Jeter or an A-Rod man, then pick the person your favorite player voted for, then sit back, relax, and act like you made a difference. 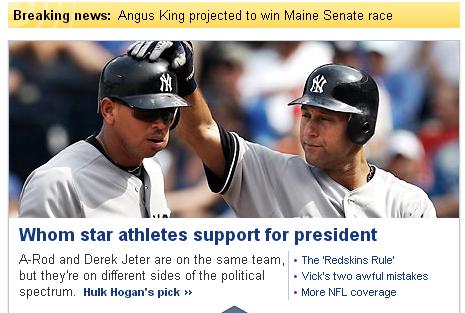 On top of that, to add insult to the intelligence of Americans, Yahoo News lets us know who Hulk Hogan picked!  Like I want to know who the man who does the Rent-a-Center commercials votes for!  Are you telling me the same man who shouts in his commercials at us telling us that a 42" Flatscreen TV is a good deal at the low rate of $45 a week for 72 weeks.  Are we that smug of a society that we need to know who other people voted for.  America, SHUT UP and VOTE!  I don't even want to know who my wife votes for, it is her decision only.   Don't let your vote come from your favorite sports star, or who a celebrity voted for.  Chances are they are in a total different class in society, their needs and values many not be the same as yours.  As a veteran who served three tours in Iraq, it amazes me some of the news stories America has that isn't actually news.  Finally, if after 2 years of wall to wall coverage on CNN and Foxnews you don't know who to vote for, might as well sit this one out!

Once again Yahoo News...stay classy!
Posted by Unknown at 7:33 PM