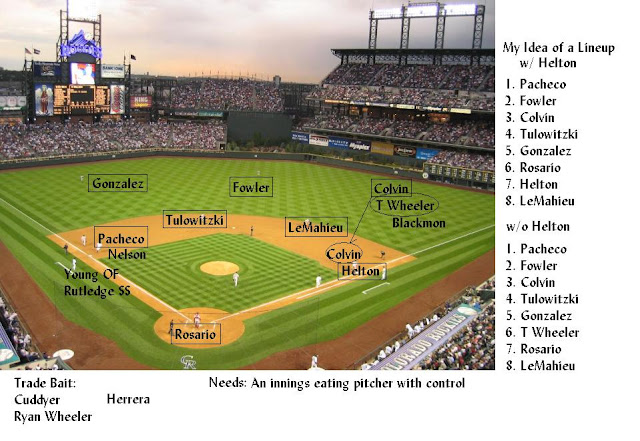 I have been reading a lot about the possibility of trades for pitching for the Rockies, but I don't think the pitching situation is really as bad as people think.  I of course am merely a blogger so I base my views on what I read and research online.  The talk of trading Fowler, Gonzalez, or Tulowitzki I think is not going to yield a type of pitcher that will come in here and go 20-8.  People all over the internet want the Rockies to go after many arms in Tampa, but pitchers in Tampa have never pitched in Colorado and you could be setting them up for a disaster.  No top tier pitcher will come to Colorado in a chance to go from a hero to a zero in a matter of a season.  I would balk at trading a top tier player for a pitcher before spring training, because most of these young pitchers were rushed into the majors from double AA Tulsa.  Last year I watched most of the Rockies games and I seen the largest issue is control with the pitchers.  It seemed pitchers were walking one per two innings.  There were 566 walks in 1422 innings (.4 per inning).  I then look at the Tampa Bay pitching in 2012 and I see only 469 walks.  The Rockies on average put 80-90 more runners on base because of lack of control.  Once these free passes started then these young pitchers began to buckle. The Rockies need pitchers that have control and have a lineup that can out slug their opposition.  The pitching needs to learn situation pitching and not just throwing fire towards home plate in hopes the batter will miss.

If the Rockies pitchers can limit the large amount of walks then you are talking already shaving off maybe 75 runs in the year.  It doesn't sound like a lot, but think of all the games the Rockies will lose by one.  By having more control to put one or two less on base a game could save that one run needed for a win.  The Rockies need to field a team that are hitters, and cut down on the strike outs.  Gonzalez needs to lay off the outside change ups, Tulo needs to lay off the high hard fast balls in his eyes, and Rosario making more contact.  We all knew the Rockies pitching was in bad shape when Moyer was a starter.  But I really feel that the Rockies pitchers gained a lot of on the job training in 2012 by seeing how difficult it is in the Majors and in Colorado.  I would like to see a trade of maybe Cuddyer for a dependable mid line pitcher who has control and can eat innings.  Someone who has pitched in Colorado and knows what it is like, unlike bringing in Gutherie last year from the AL.

I love Helton, but I really think Helton due to his back should be a back up and maybe Tyler Colvin moving down to firstbase leaving Blackmon and Wheeler battling for the job.  I like D.J. LeMahleu at second.

I am going to post my predictions for 2013 Rockies: