I hope everyone in the storm's path is alright, and hello again everyone!  I have thought a lot about something  that both bothers me and gives me enjoyment, autographs!  Last month I got a box of 2012 Leaf Cut Signatures and pulled a heavily collected former baseball star, Curt Blefrey. (who?) 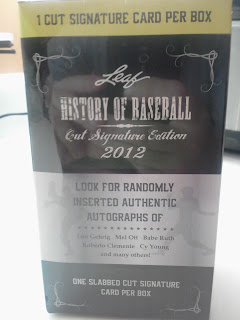 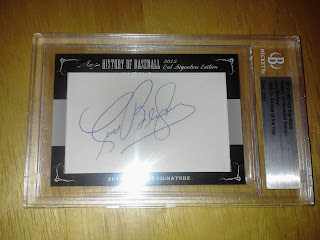 After getting this card I got to thinking about this card I pulled.  I know this isn't a new discussion in the blog world but I haven't really given it any thought till now.  The player on this card died almost 12 years before this product came out and since I have pulled this card I noticed there are dozens of autographs on index cards (by themselves going on sale on ebay)  Blefary  is not a well known player compared to stars like Babe Ruth and Ted Williams but I go on ebay and I see dozens of his signatures on index cards.  Blefary died in early 2001 so I am guessing he signed thousands of blank index cards to be used in future baseball card signature sets for many years to come.  I found this card on ebay that was PSA/DNA certified, yet it looks so much different than all others.
Look at those two signatures (I don't know if it is a fake or not), but how many "cut" signatures out there that scam artists are sending in index card to PSA/DNA to sell their autographs for more on ebay.  An index card signature of Curt Blefary you can get for around $10, but once it is PSA certified it is worth $50.  Just think of all the players in all the sports, how many people out there are making money on trying to get fake cut signatures certified to double or triple that index cards value.  Nobody is going to throw up red flags on the possibility of fake cut signatures of lesser known players, such as Blefary.  It only makes card news if fake autos are found in Babe Ruth, Mantles, or Ted Williams.  You can type just about any player who has died in the past decade on ebay and some of them you will find dozens to hundreds of index card/cut signatures selling.  From all the autographs I seen online of Blefary, almost 100% look like the card I pulled in the 2012 Leaf Cut Signatures, if I pulled both at the same time, I would tell you that they weren't signed by the same person.

Next on my concern list is the amount of items and autographs that surface year after year of players of over a century ago.  We are now over ten years since card companies have cut just about everything from seats, bats, jerseys, pants, shoes, contracts, and index cards of past players, at what point are we going to run out?   How do we have NO autographs of Shoeless Joe Jackson for almost a century but suddenly cut signatures are booming and they are coming out of the woodwork everywhere.  If a scammer can get just one fake Ruth certification on a signature then put in on ebay they can make a quick thousand(s) on just making a current signature look old.  It seems every year that passes we just magically find another hundred Babe Ruth signatures.  It seems with every Topps product they show another batch of cards that have more Ruth autos and relics.  Of course it would be awesome to say I have an autographed Babe Ruth, or relic card, but will I pay anything for it?  Not a chance!  I trust those ugly Topps autographed stickers, but I don't trust a random index card made into a card, and I don't understand why people still pay that much on the chances of even a certified card/signature is fake.

In addition I think to myself how many times me and my wife sign for each other on checks and documents.  How many of these cut signatures could have came from a document a financial guy did, or a canceled check their wife signed on the line as him.  We don't know!  Use the example of almost every check my wife sends out for bills she signs my name on it since my name is on the account.  So if I suddenly became famous, most of all my checks aren't really signed by me.  Look at the check below of Jackie Robinson, could Jackie have a wife or financial man paying his bills and signing it for him?  This check still has almost 2 days and it is at $536, I can get a ton of great current cards and players for just that amount.  Heck, how do we know that this check didn't come from someone else named Jack R Robinson.  There is just to much doubt, even with certification for me to put hard earned money down.

Unless someone actually documented that the signature was indeed the player at that time, I will forever treat these vintage cut signatures as I view manufactured patches, just a cool novelty.  Never thought I would say I would rather have an ugly autograph sticker on a card then a random index card graded, because at least I have almost 100% faith that sticker was really signed by the player.

*I am not an expert, this is a personal view on cut signatures.  I truly don't have the knowledge of figuring out fake or real signatures and this blog is not intended to sway anyone's views, not to be viewed as a news source, or to discredit PSA/Leaf, or any of the card companies that use cut signatures.
Posted by Unknown at 10:10 PM